You are here: Home

This prickly plant has distinctive purple flowers and white veins, which traditional stories say were caused by a drop of the Virgin Mary’s milk falling onto its leaves.

The active ingredients in milk thistle are a group of plant compounds collectively known as silymarin.

The silymarin extracted from milk thistle is known to have antioxidant, antiviral and anti-inflammatory properties.

In fact, it has traditionally been used to treat liver and gallbladder disorders, promote breast milk production, prevent and treat cancer and even protect the liver from snake bites, alcohol and other environmental poisons. 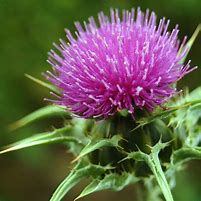 Milk thistle is often promoted for its liver-protecting effects.

It’s regularly used as a complementary therapy by people who have liver damage due to conditions like alcoholic liver disease, non-alcoholic fatty liver disease, hepatitis and even liver cancer.

It’s also used to protect the liver against toxins like amatoxin, which is produced by the death cap mushroom and is deadly if ingested.

Studies have shown improvements in liver function in people with liver diseases who have taken a milk thistle supplement, suggesting it could help reduce liver inflammation and liver damage.

Although more research is needed on how it works, milk thistle is thought to reduce damage to the liver caused by free radicals, which are produced when your liver metabolizes toxic substances.

One study also found that it may slightly extend the life expectancy of people with cirrhosis of the liver due to alcoholic liver disease.

However, the results from studies have been mixed, and not all have found milk thistle extract to have a beneficial effect on liver disease.

Thus, more studies are needed to determine what dose and length of treatment are needed for specific liver conditions.

And although milk thistle extract is commonly used as a complementary therapy for people with liver diseases, there’s currently no evidence that it can prevent you from getting these conditions, especially if you have an unhealthy lifestyle.

SUMMARYMilk thistle extract may help protect the liver against damage caused by disease or poisoning, though more research is needed.

2. It May Help Prevent Age-Related Decline in Brain Function

Milk thistle has been used as a traditional remedy for neurological conditions like Alzheimer’s and Parkinson’s disease for over two thousand years. .

Its anti-inflammatory and antioxidant properties mean that it is possibly neuroprotective and could help prevent the decline in brain function you experience as you age .

In test-tube and animal studies, silymarin has been shown to prevent oxidative damage to brain cells, which could help prevent mental decline.

These studies have also seen that milk thistle may be able to reduce the number of amyloid plaques in the brains of animals with Alzheimer’s disease.

Amyloid plaques are sticky clusters of amyloid proteins that can build up between nerve cells as you age.

They are seen in very high numbers in the brains of people with Alzheimer’s disease, meaning that milk thistle could potentially be used to help treat this difficult condition..

However, there are currently no human studies examining the effects of milk thistle in people with Alzheimer’s or other neurological conditions like dementia and Parkinson’s.

Moreover, it’s unclear whether milk thistle is well enough absorbed in people to allow adequate amounts to pass through the blood-brain barrier. It’s also unknown what doses would need to be prescribed for it to have a beneficial effect.

SUMMARYInitial test-tube and animal studies have shown that milk thistle has some promising characteristics that could make it useful for protecting brain function. However, it’s currently unclear if it has the same

3. Milk Thistle Could Protect Your Bones

Osteoporosis is a disease caused by progressive bone loss.

It usually develops slowly over a number of years and causes weak and fragile bones that break easily, even after minor falls.

Milk thistle has been shown in experimental test-tube and animal studies to stimulate bone mineralization and potentially be protective against bone loss.

As a result, researchers suggest that milk thistle may be a useful therapy for preventing or delaying bone loss in postmenopausal women.

However, there are currently no human studies, so its effectiveness remains unclear.

SUMMARYIn animals, milk thistle has been shown to stimulate bone mineralization. However, how it affects humans is currently unknown.

4. It May Improve Cancer Treatment

It’s been suggested that the antioxidant effects of silymarin may have some anticancer effects, which could be helpful for people receiving cancer treatment.

The animal studies have shown that milk thistle could be useful for reducing the side effects of cancer treatments.

It may also make chemotherapy work more effectively against certain cancers and, in some circumstances, even destroy cancer cells.

However, the studies in humans are very limited and have yet to show a meaningful clinical effect in people.

This may be because people aren’t able to absorb enough to get a medicinal effect.

More studies are needed before it can be determined how silymarin might be used to support people undergoing cancer treatment.

SUMMARYThe active ingredients in milk thistle have been shown in animals to improve the effects of some cancer treatments. However, human studies are limited and haven’t yet shown any beneficial effects.

5. It Can Boost Breast Milk Production

One reported effect of milk thistle is that it can boost breast milk production in lactating mothers. It’s thought to work by making more of the milk-producing hormone prolactin.

The data is very limited, but one randomized controlled study found that mothers taking 420 mg of silymarin for 63 days produced 64% more milk than those taking a placebo. .

However, this is the only clinical study available. More research is needed to confirm these results and the safety of milk thistle for breastfeeding mothers. .

SUMMARYMilk thistle may increase breast milk production in women who are lactating, though very little research has been done to confirm its effects.

6. It Could Help Treat Acne

Acne is a chronic inflammatory skin condition. While not dangerous, it can cause scars. People may also find it painful and worry about its effects on their appearance.

It’s been suggested that oxidative stress in the body may play a role in the development of acne. .

Due to its antioxidant and anti-inflammatory effects, milk thistle may be a useful supplement for people with acne.

Interestingly, one study found that people with acne who took 210 milligrams of silymarin per day for 8 weeks experienced a 53% decrease in acne lesions (42).

However, as this is the only study, more high-quality research is needed.

SUMMARYOne study has shown that people taking milk thistle supplements experienced a decrease in the number of acne lesions on their body.

Milk thistle may be a useful complementary therapy to help manage type 2 diabetes.

It’s been discovered that one of the compounds in milk thistle may work similarly to some diabetic medications by helping improve insulin sensitivity and decrease blood sugar.

In fact, a recent review and analysis found that people routinely taking silymarin experienced a significant reduction in their fasting blood sugar levels and HbA1c, a measure of blood sugar control .

Additionally, the antioxidant and anti-inflammatory properties of milk thistle may also be useful for reducing the risk of developing diabetic complications like kidney disease.

Milk thistle is generally considered safe when taken by mouth. .

In fact, in studies where high doses were used for long periods, only about 1% of people experienced side effects.

When reported, side effects for milk thistle are generally gut disturbances like diarrhea, nausea or bloating.

Some people are advised to be cautious when taking milk thistle. These include:

SUMMARYMilk thistle is generally considered safe. Nevertheless, pregnant women, those allergic to the Asteraceae family of plants, those with diabetes and anyone with an estrogen-sensitive condition should seek medical advice before taking it.

Milk thistle is a safe supplement that shows potential as a complementary therapy for various conditions, including liver disease, cancer and diabetes.

However, many of the studies are small and have methodological flaws, which makes it difficult to give firm guidance on this supplement or confirm its effects.

Overall, more high-quality research is needed to define the doses and clinical effects of this fascinating herb.

We have 142 guests and one member online

We use cookies on our website. Some of them are essential for the operation of the site, while others help us to improve this site and the user experience (tracking cookies). You can decide for yourself whether you want to allow cookies or not. Please note that if you reject them, you may not be able to use all the functionalities of the site.